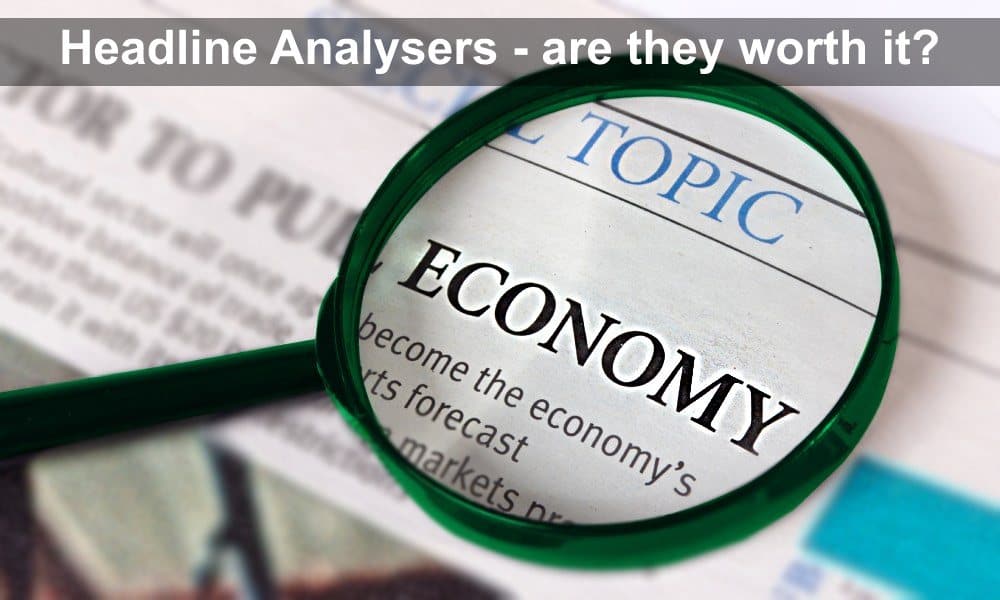 You know headlines, blog titles and email subject lines matter. You may also have heard of headline analysers – or maybe you haven’t! Today we’re taking a deep dive into headline analysers. That includes reviewing and comparing the different options out there, so you can decide what might work for you.

What is a headline analyser anyway?

A headline analyser is basically an algorithm – some clever code which applies rules to any headline you enter and gives you feedback. That feedback is usually a score and some suggestions as to how to improve it. Those suggestions cover all kinds of things from:

A headline analyser can be a useful tool – but it’s important to remember it’s just a tool. Use it to get suggestions and ideas, just don’t be a slave to the final score.

Remember, the headline analyser looks at a headline in a vacuum. It knows nothing about who your target audience is. It knows nothing about what’s going on in the world right now and affecting their emotions and focus. And when it analyses words and sentiments, it’s working from a list. If you look at some of the reviews below, you’ll see that those lists, applied by an algorithm, don’t always make perfect sense.

Like any other tool, you get better results if you use it properly.

Your headline is a hook to get people engaged and reading. The usual advice is to write 10-20 different headlines before deciding on the one to use. That sounds overwhelming! But a headline analyser with a history capability gives you a framework to do that. Just remember, you don’t have to choose the headline with the absolute highest score.

What’s the best headline analyser to use?

Before writing this, we went online and searched for headline analysers. We tested them all with the same headline and variants. Note – the starter headline we chose was from one of our own posts which punches above its weight in Google: How to communicate a price increase.

The reviews are below, but if you want to you can skip ahead to the conclusions.

Probably the best known headline analyser is from CoSchedule. This has been around for ages, and back in 2017 it was one of my two favourite free copywriting tools.

Unfortunately, it’s no longer completely free. First you had to register. Now, if you want to use it more than a few times a month, you have to pay.

Here’s what we got for our headline: 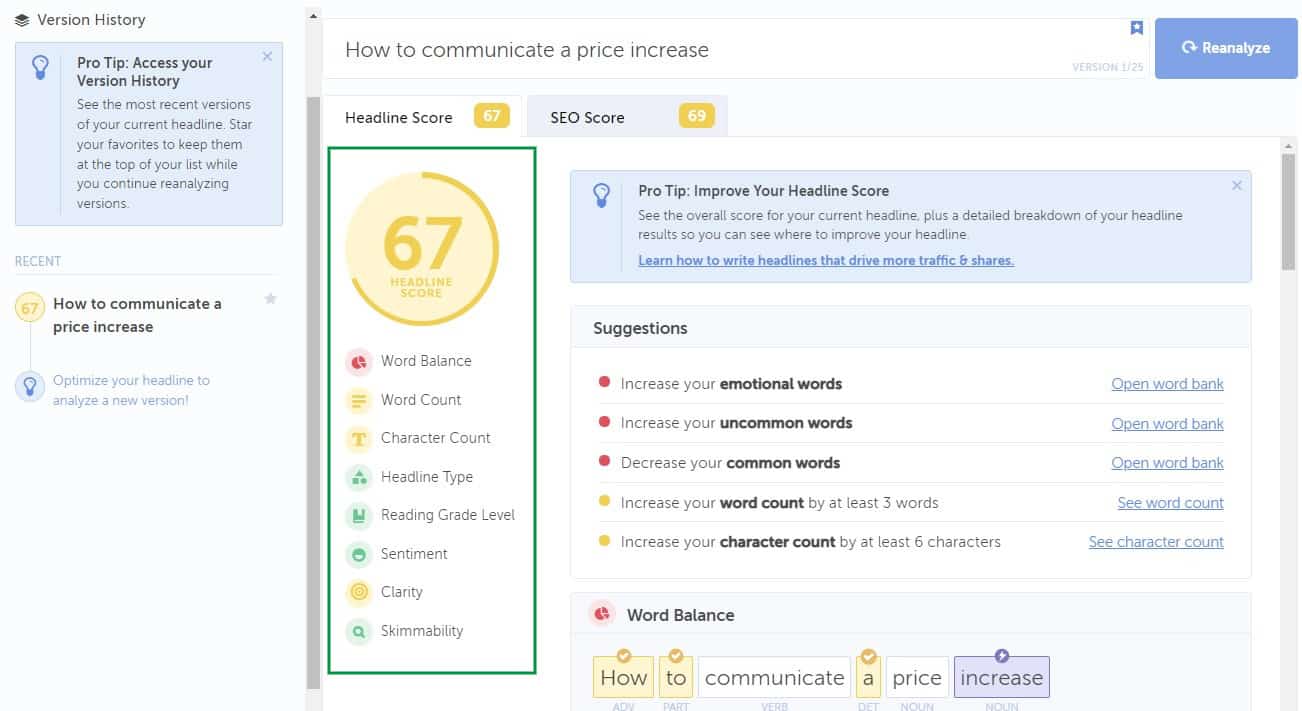 You can see the overall score of 67 – yellow, so not too bad, but not too good either. You can also see (in the highlighted green box) the various components of this score. Each of them has their own colour, which makes it easy to zero down on issues to work on.

So what are the core features of the CoSchedule Headline Analyser?

Everything listed above has been part of the CoSchedule Headline Analyser for many years. There’s one more longstanding feature which I think is essential – and that’s the version history. You can see it highlighted on the left in the screenshot below.

This ‘Recent’ section is where you can see and compare the various headlines you are considering for any one post. To me this is an essential feature of any headline analyser.

You may remember I said CoSchedule added a lot of functionality when they upgraded to a paid option. In fact, they introduced so much that they added a whole new tab! It’s called the ‘SEO Score’ tab. 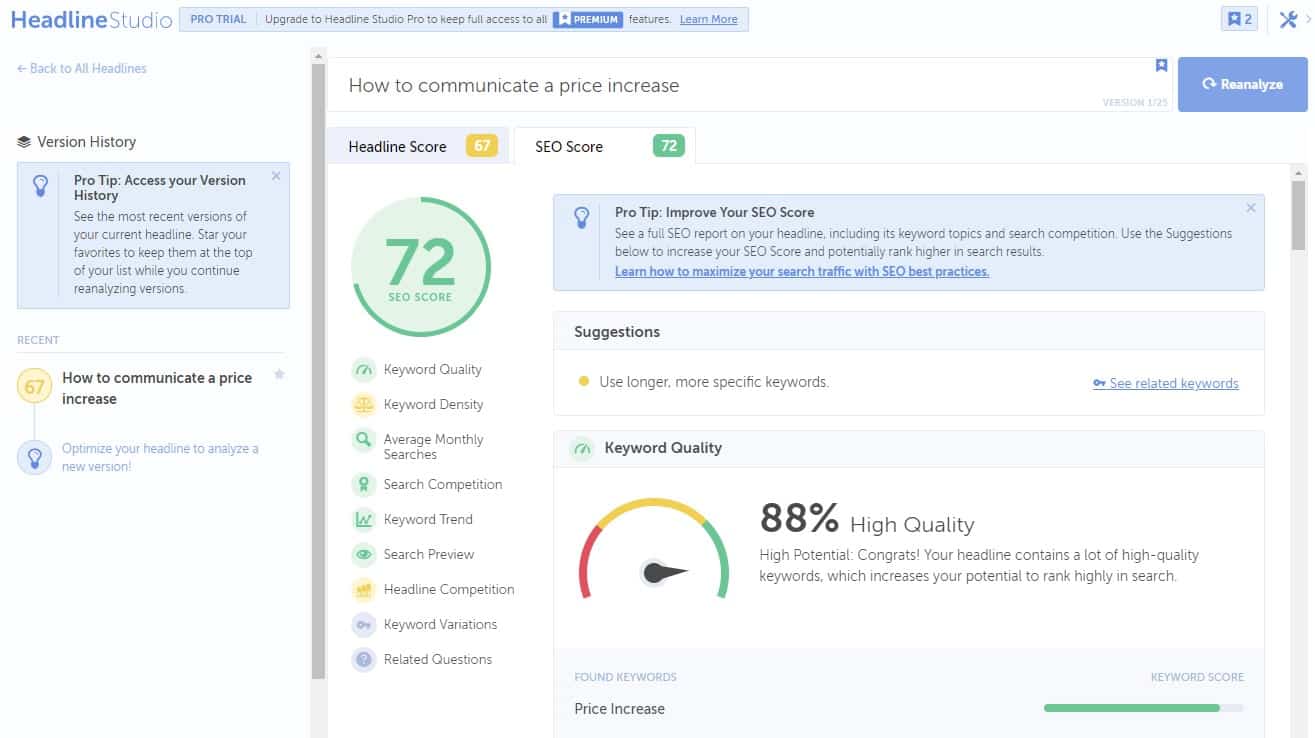 To be honest, while this is interesting, I’m not as convinced about all of this as I am about the core headline analysis.

My first question is about the search term they use to generate results.

I think (and I’m not 100% sure, just to be clear) that they simply plug your headline into Google. And I have concerns about how that matches what real life users do. It might be OK for a simple headline like the one we used – ‘How to communicate a price increase’ – but it’s harder to imagine people typing some of our variants into Google. (“Price increases. How to communicate properly and avoid losing customers.” Who would ever search on that?!?)

Having flagged that issue, there are some interesting things in this SEO tab.

At NoBull Marketing we already use a paid SEO tool to research keywords, so this is of limited value to us. But if you don’t have access to such a tool, this is an affordable way to get some access.

On the down side, remember you need to optimise the entire post, not just the headline. I feel there’s a risk of less experienced people getting a green SEO score and thinking their post is OK, when in fact it may not be that way at all.

So should you use CoSchedule?

If you’re not using any other SEO tool, it’s certainly good value, although you might want to work on headlines before you write posts instead of afterwards. But if you have other SEO tools, or if you’re tweaking a headline at the end of the writing process, you may find you can get everything you need in other headline analysers at no charge. 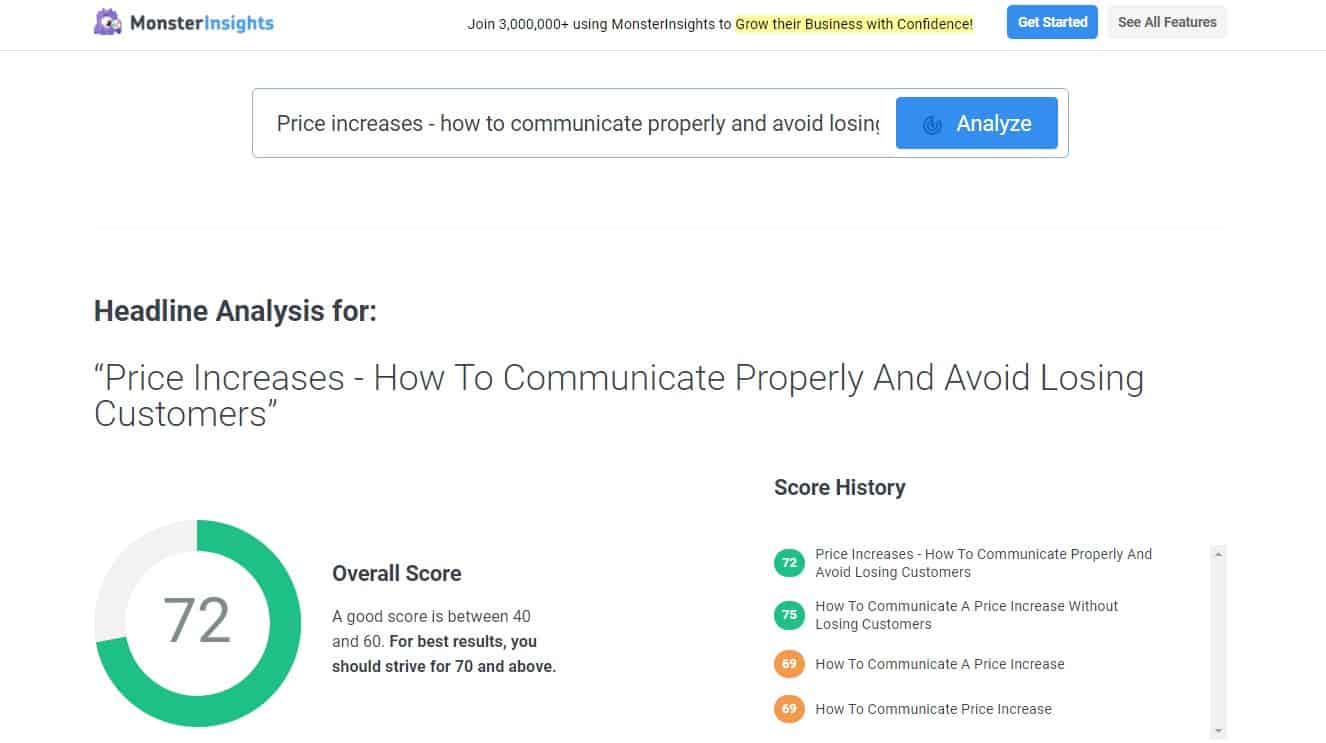 Whatever’s powering these sites, it’s a pretty close copy of the original CoSchedule Headline Analyser before they added the SEO tab. It has almost the same functionality:

As I mentioned above, I’m not convinced readability is really an issue for a headline analyser. And clarity is closely related to the ‘skimmability’ or ‘beginning and ending words’ concept.

So these headline analysers give you something very close to the old Coschedule free option. And they’re free too!

My vote goes to IsItWP. Not because it works any better than the others though. Just because I think it’s got a cleaner design. You can make your own choice.

Content Row is more basic than the headline analysers listed above. It seems to focus on word count and emotional content only.

It also suggests numbers and superlatives (best, worst, most xxxx). These are features of clickbait headline formulas.

However, the real killer for me is that the unpaid version of Content Row limits you to three headlines a day. That’s not even enough to do serious thinking about headlines for one post! There is a paid plan, but it costs more than CoSchedule.

Sharethrough Headline Analyser is another one that doesn’t make the cut, but I had fun playing with it. 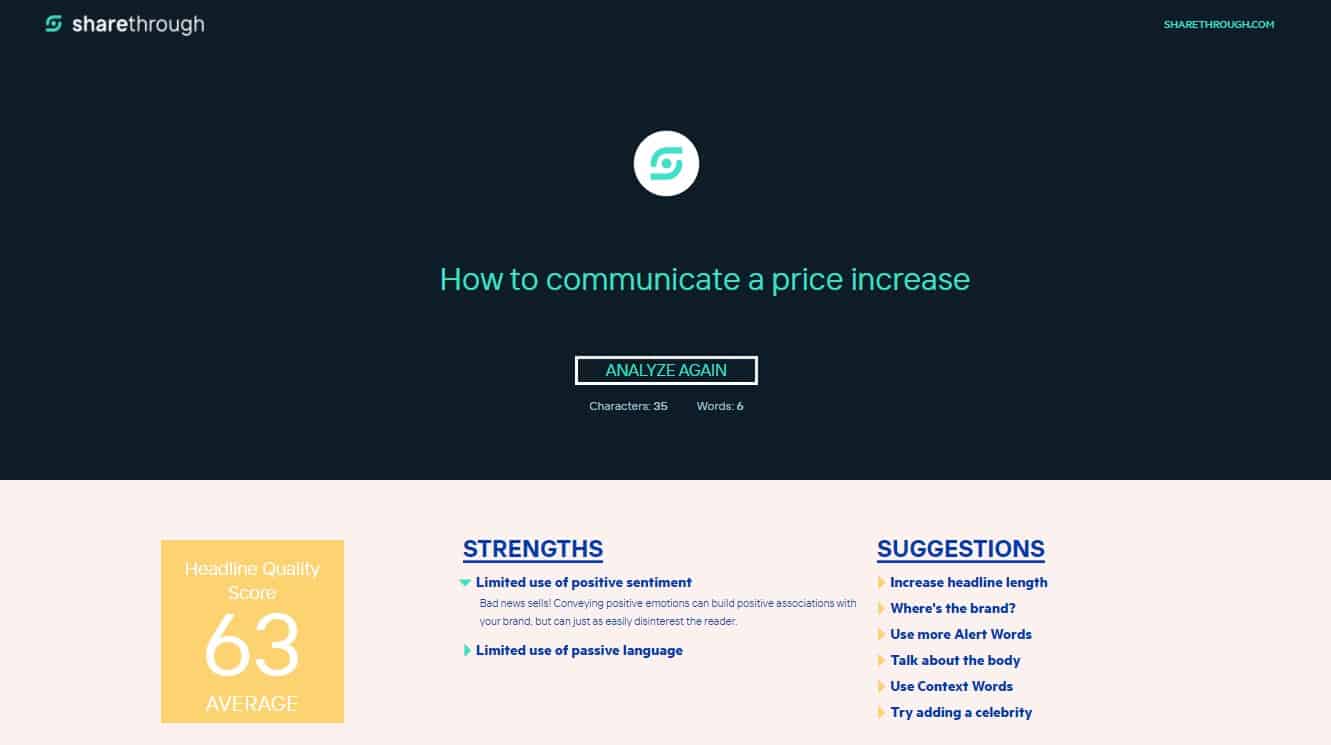 Here’s another one that doesn’t make the cut, but my goodness I had fun playing with it.

The features are more limited, but intriguing. Check out the list of ‘suggestions’ on the right hand side:

It’s quite a different mix. Brands? Celebrities? Talking about the body?

When I investigated, Sharethrough provide programmatic advertising, which is all about pushing the right ads to large consumer markets online. That means Sharethrough as an organisation is heavily focused on big consumer brands. Which explains the focus on celebrities, bodies and brands. It also means it’s probably less relevant to many NoBull Marketing clients who are operating business-to-business or in niche markets.

First, the ‘context words’. This is the only headline analyser I’ve seen which claims scientific research to support a list of ‘power words’. (Context words are basically power words.) I can’t judge the validity of those claims, but it’s interesting.

Secondly, I had a ball playing with the celebrity feature. Some celebrities score much higher than others. Check out how much Kim Kardashian knows about communicating a price increase, compared to Elon Musk! 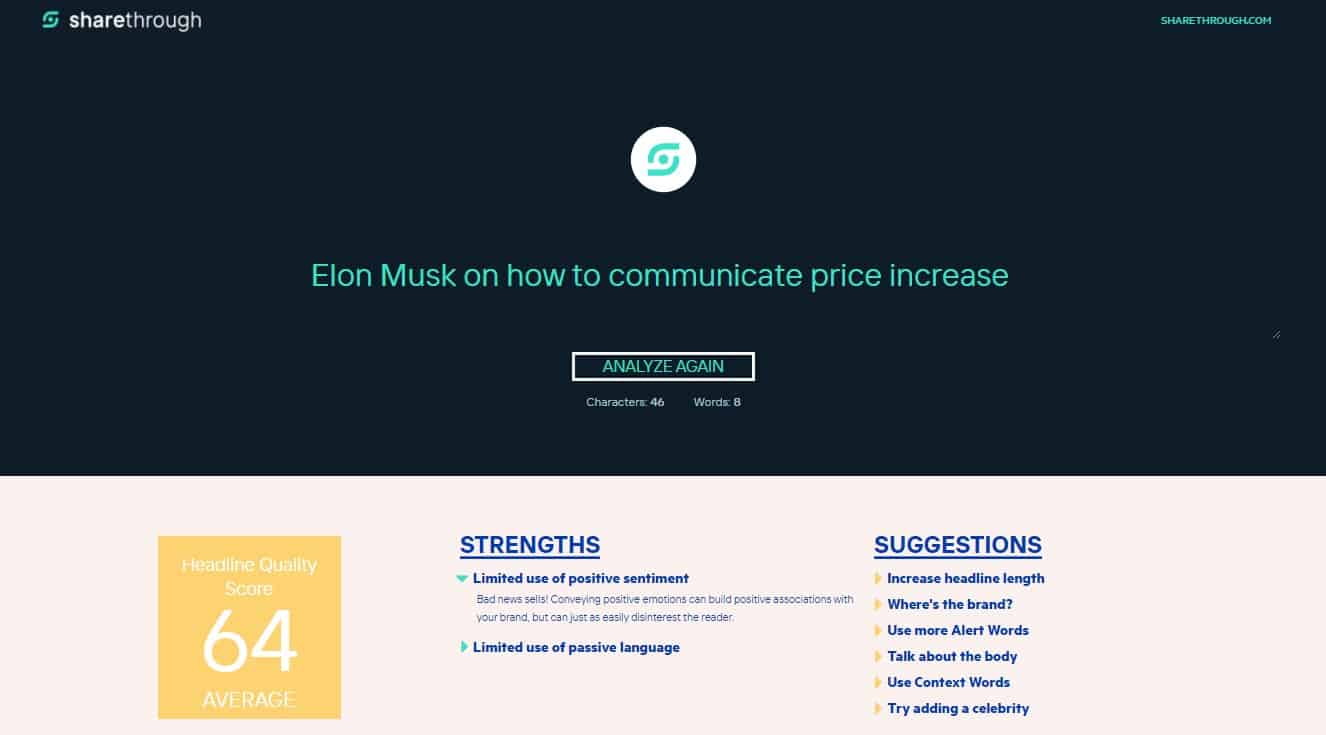 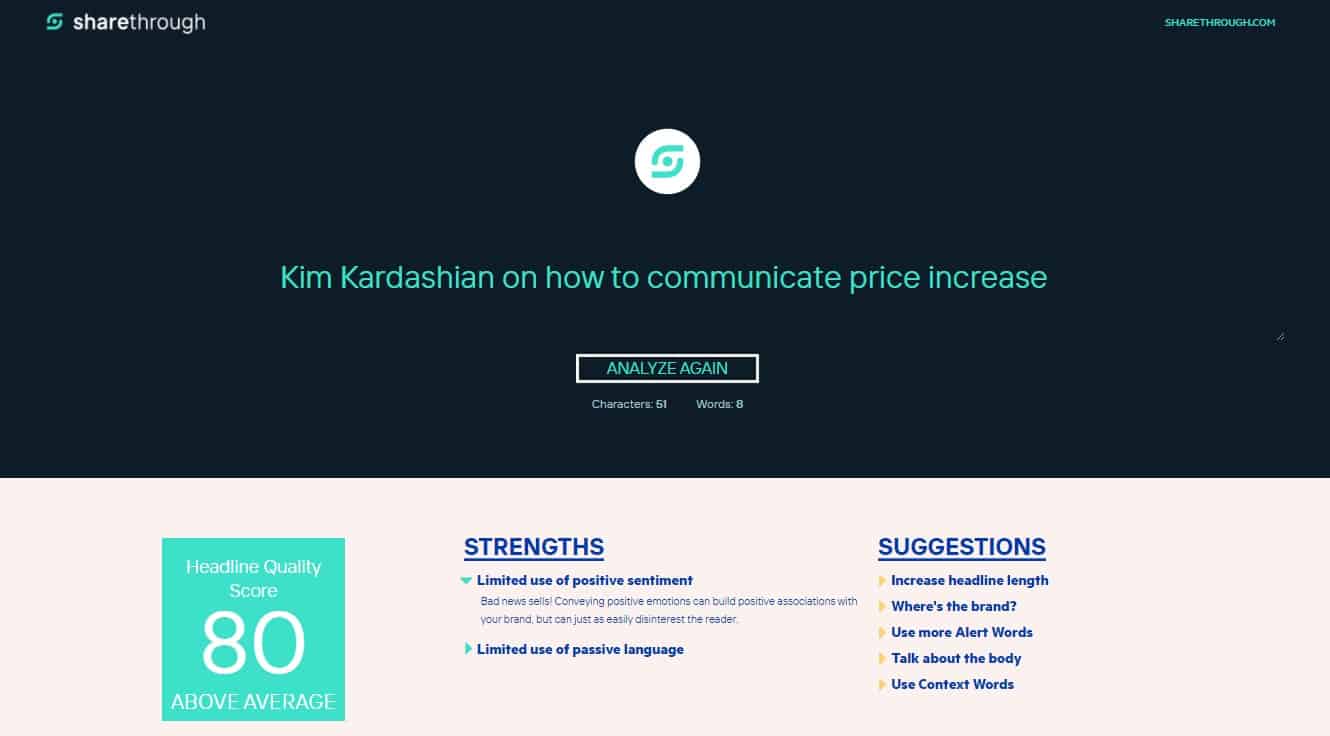 I’m including this one for the sake of completeness.

Very basic functionality. Lots of ads and popups. No history so you can compare headlines. Not recommended.

Last, but not least, the Advanced Marketing Institute.

This is a single purpose headline analyser. It’s not trying to look at SEO factors like title length, readability, power words and so on. The only thing it does is to assess the emotional marketing value of your headline. It doesn’t have a headline history either.

I assume this is because of the old saying: ‘people buy on emotion and justify on data. If you believe that, then you want to assess the emotion in a marketing headline.

I assume it works from a list of words with emotional content. There’s no information about which words are in the list, how they were chosen, or what emotions they trigger.

So how and why would you use this one?

Maybe, just maybe, as a contrast to CoSchedule or one of its close copiers.

Imagine you’ve worked your headlines and you have two or three which score well by the SEO-focused formulas they use. Maybe this, working in a completely different way, can act as a sanity check? Something to make sure you’re still talking to humans, not just an algorithm?

Or maybe it’s just not that good, but I’m swayed because Ann Handley uses it and I admire her immensely?

It’s certainly not my first choice!

So now we’ve been through all the headline analyser options we can find, what’s the conclusion? It’s quite simple really.

If you’re happy to pay and you’re think the SEO keyword information is useful, use CoSchedule.

If you’d rather save your pennies, use IsItWP or one of its sister clones.

Whew. It took a long time to get there. At least some bits of it were fun!

And if you come across (or develop) another headline analyser, please let me know. I’ll be happy to review that as well.